A frequent question I've been getting lately, is "how do you find such a cool chick that likes to travel and camp with you?"

That's a question that I also find myself asking often...
"Self?"  I say, "how did you get so lucky to find such an incredible woman like Shannon?"


We've been hanging out in North Carolina for the past week, spending time with Shannon's parents and her younger sisters before we set sail for the Pan-Am.  Shannon's dad recently bought a new US Atlas so last night we began thumbing through the pages.  We started talking about our upcoming departure and planned route through the US and Mexico.  Naturally the discussion shifts to places we'd like to explore or see again in the continental United States.  Then I'm hit with a reminder of why Shannon is debatably more excited about this trip then I am...


Next thing I know, the picture albums come out and we're laughing at old family photos from trips that this family has taken over the years.  You see, Shannon has been a road warrior since before I was potty-trained.  Every summer her parents would drag her and her sisters all over North America in an '83 Westy.  She was dragged from Texas to Canada, east coast to the west coast, several times in this baby blue adventuremobile. 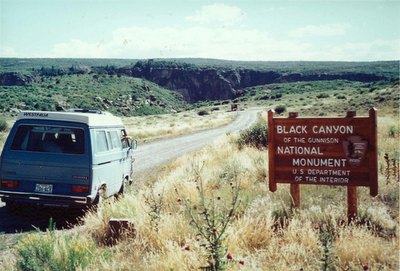 As we look at proof of my fiancee's early awesome-ness, her father mentions that Shannon was always the girl who had to climb higher and hike further.  She truly enjoyed to rough it and I now understand why she loves to live in a tiny vehicle packed with a month's worth of camping gear and clothes.  We chuckle at her little boy haircuts, her tomboy outfits, and the silly poses she makes with her sisters.  We also joke about her dad's knee socks and short pleated shorts, then move on to her mother's 80's haircuts and tough-girl attitude (the attitude has never changed and it's easy to see where Shannon gets hers). 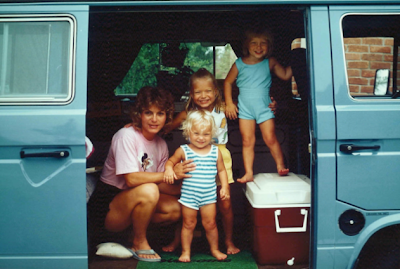 Sadly they sold the old Westy because it was underpowered (gasoline) and once the 4th little girl came along it was too small for the whole family to travel in.  I imagine that was a sad day for them, but at least they replaced the old VW with a suitable vehicle.  Shannon never forgave them, but I keep promising her that someday we will have a Westy of our own (maybe I'll make the 4runner a pop-top instead).

Shannon's dad always jokes with me about how rough fatherhood has been, having to raise 4 little girls, with his testosterone constantly under jeopardy.  After looking through these photos, hearing about their adventures, and seeing the young women that they've raised...I think he's made the best of that situation over the years and I'm really starting to see the perks of fatherhood.