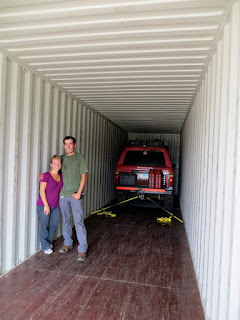 Remember when we used to write a blog?

Oh you forgot about our blog. That's cool, so did we...

Well much has happened since our last post. As a matter of fact, we've officially been traveling full-time for over 365 days now. Yep, that's right.  We recently celebrated the 1 year anniversary abroad by visiting the ruins of Machu Picchu. An entire continent away from where we last wrote about. You know what the kicker is? OUR BEAT UP OLD 4RUNNER DROVE US HERE. I know, that's still a weird concept. Almost 300,000 miles on the clock and it’s still going strong.

Sure we cheated a little by shipping our vehicle around the Darien Gap.  We squeezed the 4Runner into a shipping container headed to Cartagena and we boarded a small sailboat passing through the San Blas Islands to finally arrive in South America.  This  headache  spared us a few hundred miles of driving, but that short stretch is blocked by dense jungle and controlled by narcos and FARC guerrillas.

Shipping was definitely the low point of our trip, but to be honest it really wasn't that bad other than the port in Colon flooding and getting stuck there longer than we’d hoped.  Thanks to the Three P's: patience, politeness, and persistence; the process took us thirteen days from start to finish.

In the past six months we've learned a lot. For instance, blogging takes WAY too much precious travel time so we’ve pretty much decided to stop writing updates.  We'd much rather update our friends and family via photos on Facebook or Instagram. They say a picture is worth a thousand words, and obviously when given the chance to write a thousand words I'll ramble on until three thousand words have summarized one photo.  So social media is where you can find out if we are still alive or died of dysentery.

From now on our blog will serve as more of an info page with basic details that might help the next person traveling the Americas in an ancient 4Runner.  If you see future posts from us, it will only be when the moment strikes us and we have loads of free time and good WiFi (which is close to never).  We much rather spend our time away from the computer and enjoying the splendors that South America has to offer us.

We have actually created a 'Photos' tab at the top of our site, which can take you directly to our Facebook.  We can also be found on Instagram

Here's another lesson we've learned: Spanish takes serious time to master. Vocabulary and accents vary from town to town and some locals refuse to anunciate no matter how politely you ask.  We've finally reached a point where we can converse well and not sound like complete idiots, although some countries were easier than others.  In Costa Rica, it was difficult to get someone to actually speak with us in Spanish because so many locals speak English.

We've loved Central America, even though most of our time spent there was during the rainy season. Sure it was wet, muggy, and difficult to drive at times, but on the bright side there were far less tourists and the locals were actually happy to see us there stimulating the local economy. We never had to deal with pesky reservations and overbooked hostels. I lost count of how many times we saved money by staying in a dorm room, only to find we were the only ones staying there. A large private room with multiple beds, at the price of a dormitory? Don't mind if we do!

Sadly Mexico and Central America are long gone, but rest assured we have been enjoying the hell out of South America. Some day we'll return to these countries for an anniversary or two, and hopefully we'll see some of the places that we missed during our ten months there. In honor of all the blog posts we never wrote between here and there, let's take a look at photos from some of the highlights that we never wrote about.

WARNING: These photos are not safe for work.  If you click on the following links, you will lose all productivity for the next few hours.  You may or may not be convinced to quit your job and head south.

End of the road (Panama)

By the time we reached Panama we were very ready for South America.  We enjoyed our time in the northern highlands, then our French friends Bruno and Vally told us they were in Panama City waiting for a shipping partner.  With our ride south waiting by, we rushed thru Panama and dealt with the shipping process while surrounded by fellow travelers waiting for their ships.  Thankfully we were taken in by friendly American ex-pats for Thanksgiving, saving our holiday spirit and giving us a taste of home.  Thanks Jerry and Kay, greetings from down south!