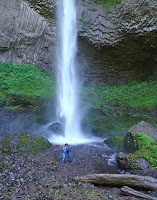 For a mintute there I was worried that I'd have to get down on one knee and propose in the Austin airport.  Fortunately for me, airport security did not seem to care about the fact that I had a diamond ring stashed inside of a tiny dental floss container.  That's right, a dental floss container.  I had to keep it hidden from Shannon somehow and I figured it would be a little sneakier than a ring box.


After all of my careful planning to keep this a surprise, I realized that I had not considered how I was going to take the ring with me to Seattle.  I couldn't hide it in my checked baggage, because god knows what would happen if the baggage-claim Goloms got their greedy little hands on the "precious" ring. I decided I couldn't just walk through the metal detector with it stowed in my pants pocket. If the metal detector goes into alarm, they would do the mandatory security grope and then pilfer the floss container...spilling out the contents for Shannon to see. Surprise Honey!

I decided my best bet would be to simply keep the floss container in my jacket pocket and slide it into the plastic tub with my shoes and watch, hoping that the x-ray technician would see a diamond ring and take pity on me. I couldn't help but secretly hope for a distraction, maybe a first-time flyer trying to bring a swiss army knife through security or an old lady with a suitcase full of fluid containers over 3 ounces. Luckily the TSA drones were too busy talking about the latest buzz on TMZ, and I slipped through the checkpoint without a second glance. 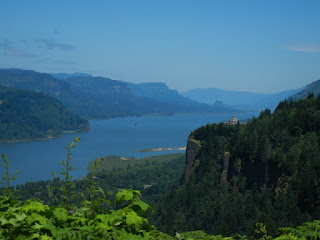 After spending a couple days in Portland, we were on our way to the Tri-Cities for a "Bon Voyage" party at our friend's house. This will be our last trip to the Northwest before the big trip South...

The historic Columbia River Highway runs parallel to I-84, winding its way through scenic vistas, trailheads, and roadside waterfalls including the famous Multnomah Falls. We stopped several times to stretch our legs and get some close-up photos with the beatiful roadside attractions.

We stopped at Latourell Falls because there were hardly any crowds and I have never been to this particular attraction. Latourell Falls is unique among the Columbia Gorge waterfalls, in the way that it drops straight down from the overhanging basalt cliff. Most of the others, even Multnomah Falls, tumble to some degree. You can get as close as you want to the water, even standing directly under the falls is possible if you want to get your lights knocked out. There was hardly anyone there, so we took time snapping photos of the impressive surroundings. There was a very rustic footbridge that crosses over the stream and a trail that winds away towards the direction we came from. 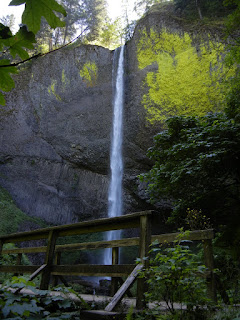 After soaking in the scene, I decided this would be a beautiful spot to propose. The moment seemed right, especially considering that there was hardly a soul to witness the occasion. I suggested to Shannon that we should put on our raingear and grab the GoPro waterproof video camera, so we could take some fun video of us playing next to the powerful 250ft falls. What a great excuse to videotape your secret proposal, right? I could tell she was ready to get back on the road, but she didn't need much persuasion to get wet in the falls' mist. 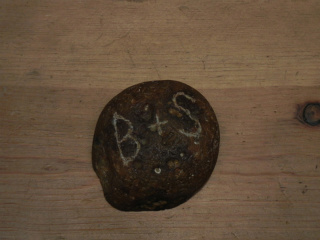 We went back to the car and I grabbed the unique stone that my sister brought me back from Madagascar. Shannon has always had a cute obsession with interesting rocks. When we go hiking, she picks up the exotic stones and takes them home. According to her dad, she's done this since she was a little girl. At home, I took the time to engrave our initals into the stone so that it would stand out more. On the opposite side, I quickly hid the ring inside of a crevice that was formed by a geode. I used some clear packaging tape to make sure the ring wouldn't slip out of the geode, then I placed the ring in my pocket.

We put on our raingear, grabbed the videocamera, and then went on our way back down the trail. I'll never forget how anxious I started to feel after I decided that this would be the spot that I would propose to my wife. Would it be perfect enough? Will I say something stupid and ruin the moment? Oh god, here we go...

We reached the falls and I set the camera up on a large log nearby. After seeing us go down to the lower area near the falls, a girl followed us and began to play around on the large rock next to us. Oh great, I thought. This girl is going to ruin everything!

We were quickly soaked by the mist from the falls and I could tell Shannon was ready to leave, so I decided it had to be done now...as Shannon was walking away I pulled the rock out and set it on the ground, then quickly said "Hey, check out this cool rock".

I picked up the rock and immediately noticed that it no longer had the "B+S" engraved on it. Apparently the water had made the rock soften up, and you no longer tell the engraving was there. Great. I was really starting to get nervous now...

Shannon came over to examine the rock. Since it no longer had the special message on it, I turned it over and showed her the geode. "Oh look, there's something inside of it". I quickly peeled the packaging tape off and Shannon was dumbfounded that this rock would have tape on it. I pulled out the ring and she was still clueless. I got down on my knee (in a large puddle mind you) and I slipped the ring on her finger...I cant recall the nervous words that I muttered after that, but we'll just pretend it was something very beautiful and suave. The important fact is that she said yes to the proposal and then she did a little dance and we kissed.

I had not noticed the crowd that had formed during this time. It had felt like hours had passed, but over the couple minutes we were near the falls about 15 people had accumulated on the bridge downstream. I was startled when I heard their loud cheers as we kissed. Apparently it was obvious to the crowd what they had just witnessed. Oh great, spectators. Well at least I'm not as bad as the guy who proposes on the jumbotron at a baseball game. 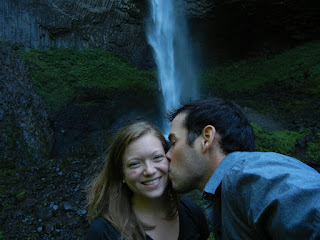 We went back to the car to dry off and take a few celebratory pictures. One of our new fans approached us and asked if we were the couple who just got engaged. She proceeded to show us the great photos that she took of the event and we gave her our contact info. We'll also pretend that I had set that up beforehand, hiring a professional photographer to capture the moment. Gosh, am I thoughtful or what? 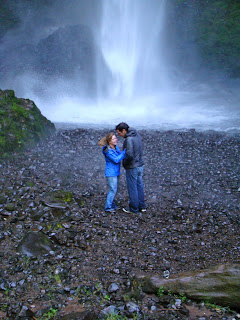 UPDATE:  So when's the date?