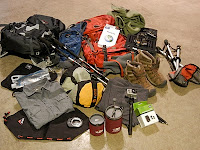 Hello my name is Brenton, and I'm a gear-aholic....

I like to walk around REI aimlessly looking at what's the latest camping gizmo. The next thing I know, I'm at home testing out the new stove that I didn't know I needed (I currently own 5 stoves), with really no recollection of how my checking account is missing a Benjamin or two...This is something that I've accepted over the years. A few interventions later and a little retail therapy (not helpful), I think I've finally found a benefit from this addiction.


I've acquired some pretty awesome backpacking gear and even a few glamping indulgences (glamp-ing, verb: shorthand for glamorous camping, luxury camping). This has saved us a ton of money for our trip because we already own many of the items that would be on a typical shopping list, and we don't have to sacrifice quality for price. I've also had plenty of opportunities to test my gear and decide what works and where our equipment is lacking.

For a long time I thought that REI stood for Really Expensive Incorporated but there's a reason that their items cost a little more than the competitors. They have a ridiculous return policy. If you buy a tent from them and take it for a weekend in the Ozarks, beat the living hell out of it and bring it back to the store on Monday because you "didn't like the design" they'll give you your money back with no grief. Unfortunately this return policy is abused by some customers, but another benefit of being an REI member is their garage sales. These returned products stack up in the back of the store, then once they've decided it's time to clear some room they sell everything for dirt cheap.

The picture above is just some of the gear that I've picked up at REI's garage sales over the years. Just this last weekend I spent $93 on stuff for our trip, but if every item were full price it would've cost us $433 dollars!

So here's a few tips if you decide you want to search for bargains at one of these events: