On our way to Mulegé, we passed thru Santa Rosalia which has a unique history.  This place is very different from any other town you might see in Baja, thanks to a French company that built a copper mine in the 1800's.  Many of the houses are covered with brightly colored clap-board siding, looking more like they belonged in the French Quarter than any part of Mexico.  The old mining operation and several other historic buildings are supposedly constructed of wood imported from the Pacific Northwest.  A less appealing sight is the "interesting" prefabbed church, designed by the same Gustave Eiffel who is famous for his tower in Paris, France.  Unfortunately we didn't take any pictures as we passed through.

Since my sister was supposed to be induced for labor that day, we decided we needed internet access to keep tabs on her situation.  At Hotel Serinidad we started our interrogation with the front desk, asking about the availability of WiFi when we were greeted by the owner…the infamous Don Johnson.  No not the same Don Johnson from Miami Vice or Nash Bridges, but I was still impressed by his friendly demeanor and hospitality.

When we asked how much it would cost to just camp in our vehicle, without any RV hookups he asked "How much have you been paying to camp so far?"  I responded with a range from $50-150 pesos per night, and he quickly matched our bottom price.  We tried to find a regular parking spot out of the way, but he insisted that we park in one of the RV spots since they were empty.  What a nice guy!

The next morning after an AMAZING breakfast from the hotel restaurant, I was trying to find out the latest news on my sister when Shannon walked up frustrated and told me that we were being kicked out of our campsite.  "What?  It's not even close to noon yet!"  Apparently a sizable caravan had arrived and the leader had reserved most of the sites surrounding us, including ours.  Even in this nice campground outside of town, this guy felt that it was absolutely necessary for the safety of his herd to be unseparated.  The caravan leader was less than tactful about the situation, but we kept our cool and remained friendly about his requests for us to vacate.  No worries, we were planning on leaving soon anyway…although I was still unsure about my sister's baby!

After Mulegé, MEX-1 meets the Sea of Cortez at Bahia Concepcion, which literally translates to Conception Bay.  After seeing the water, this actually made sense because here we found some of the most beautiful beaches in Baja...very motivating if you know what I mean.  Don't worry, even with the romantic scenery and inspiring name we managed to resist the temptation...no surprises coming up in our Ruined Adventures family. 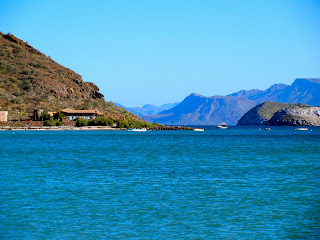 With Semana Santa (Holy Week) quickly approaching, we were in somewhat of a predicament because we had to decide where we would wait out the chaos.  Beginning on the Sunday before Easter (Palm Sunday), Semana Santa is a very important religious holiday in Mexico and most of Latin America.  Not only are there grand celebrations for the occasion, but this is also when the majority of Mexicans get 1-2 weeks off of school or work.  This can be a great time to witness unique celebrations in San Miguel de Allende or Patzcuaro (both on mainland Mexico), but in places like Baja it's best to avoid the beaches during Semana Santa.  After a year of hard work, you better believe that most Mexicans will haul butt for the beaches to party all week, crammed in like sardines along the water.  With little bathroom or trash facilities on these beaches, you can only imagine what happens with such a large crowd.

We've heard stories of gringos waking up to find their lone campsite on the beach has been completely surrounded with overcrowded hordes of locals, so tightly bunched together that they'll secure tents to your stakes and tie tarps to your guylines.  We met one fella towing a camper who said that he had people making a shelter under the tongue of his trailer!  He said everyone there had their own stereos, blaring music loud enough to drown out the neighbors and resulting in a deafening blend of sound.  One could argue that this would be the perfect opportunity to interact with the locals, but I prefer uncrowded campsites with wide open spaces and a little more quiet.  Feel free to call us snobs.  The beaches during Semana Santa are often compared to Spring Break in South Padre Island or Daytona Beach, and we're honestly a little old (and boring) for that kind of debauchery. 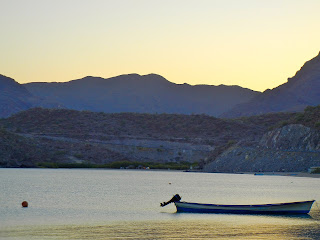 With only a couple days left, we decided to get our fill of beachside camping at Playa Santispac and then head inland before the madness would begin.  The water was amazingly clear and we managed to find a palapa with plenty of shade to tie up our hammock and catch up on some reading.  We were about 100 yards from our only neighbor and a short walk from a restaurant where we could indulge on fish tacos and Pacifico balleñas. 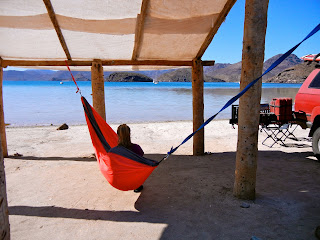 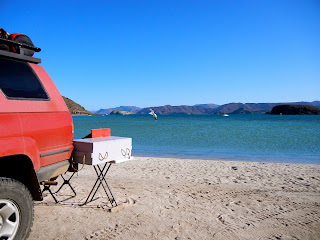 Our time at Playa Santispac was mostly uneventful and very relaxing, at least until a seagull decided to steal our ziploc full of sponges.  Apparently he figured Scotch-brite sponges would make a good meal, but without hot sauce to give it that "kick" he eventually gave it up, leaving it afloat.  Thanks seagull, for giving me an excuse to get wet! 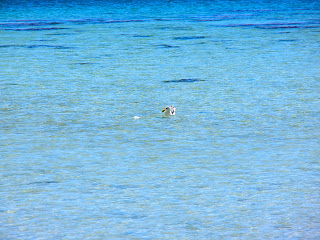 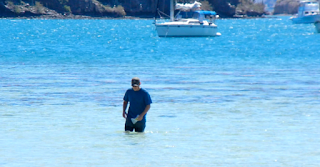