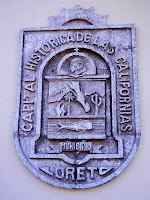 After getting our fix of sand and sun, we decided our best bet for avoiding the Semana Santa crowds was to avoid the beaches for a while.  We'd heard really good things about Loreto and it sounded right up our alley.

While trying to find a place to camp we got lost for a minute, but eventually we found a good spot close to all the action.  Once I had the BorderRunner tucked into some shade I busted out the laptop to see what I could find out about my sister.  Internet...dead.  Oh well that's Mexico for you...

Searching for dinner, we walked a couple blocks until we found a stand with a little sign that read "mariscos".  I was sold.  Me being a sucker for clams, I shrilled like a little girl when I saw almejas on the menu.  Well, this was our first big menu misunderstanding of the trip...

While "almejas fresca" obviously meant fresh clams, I ASSumed that they would be steamed.  That's the only way to prepare clams, right?  I couldn't have been more wrong.  They arrived raw, and we laughed for a minute over the misunderstanding.  "No biggie", I've had raw oysters before.

Before I dig in, Shannon is shrieking in horror.  As she squirted lime on the clam she noticed that the clam actually did the hokey pokie in protest.  We tried a few more times, just to make sure we were on PETA's radar.  Sure thing, these suckers were ALIVE and not happy.  Our waiters watched and laughed at the silly gringos for a minute, then they gave us a crash course on eating LIVE clams, Mexican style. 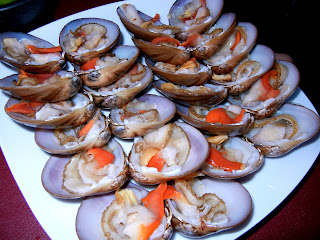 First you squirt lime in the clam's eyeballs, then you throw some soy sauce on there to confuse the little guy (are we in Japan?), then add a little picante sauce and lime in case the lime didn't piss off the clam enough.  I really didn't like the flavor, but I can fake anything fairly well (how do you think I became a firefighter?)...so I painfully choked down my share with a smile.  Unfortunately Shannon isn't as good at faking (or so she claims), so I end up having to eat most of her share too.  Thanks honey. 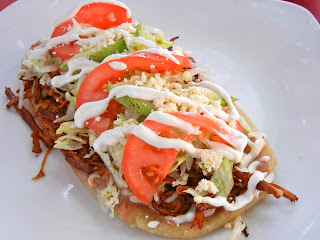 Eventually we made up for the live clam experience and ordered something right for a change.  Later that week we had a fisherman come up to our campsite selling fresh lobster.  100 pesos later I had two plump lobster tails and we were ready for some langosta!  I've never cooked lobster before but I didn't let that stop me.  I figured I can't screw up as long as I use two sticks of butter, right? 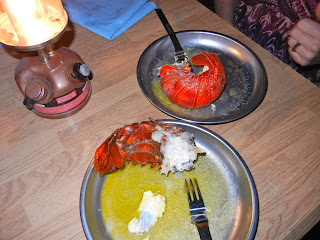 Aside from stuffing our faces, we finally managed to get the interwebs to work again...we were happy to hear that my sister gave birth to a beautiful baby boy!  Eventually we caught the happy family on Skype and it was great to see the little guy on camera. 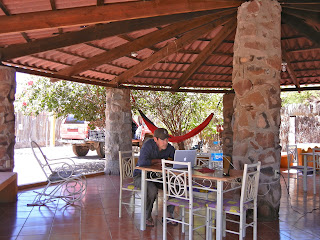 Loreto was a great place to spend Semana Santa.  We were expecting to see tons of foreigners come into town that week, escaping the beaches, but it was mostly quiet around our campsite.  Luckily there was a real friendly group of "locals" to keep us company.