We arrived in Mazatlan early the next morning and spent about half a day exploring the city before heading south to San Blas, Nayarit.  It was nice to finally make it to mainland Mexico and see the transition from desert to lush green coastline.

San Blas was one of Brenton's favorite places from when he and his sister backpacked Mexico in 2004 and he really wanted to bring me there to share in some of his nostalgia.


San Blas is known for it's laid-back demeanor and easy surf break for beginners.  We were greeted by "Pompis" Cano, the national longboard surf campion who owns the place we were camping at and offers private surf lessons.  We picked a spot to park and quickly settled in.

We spent several days in San Blas, jogging on the beach, riding bicycles through town, and hanging out in the plaza at night.  We met Diana and Stephane, a very nice couple on vacation from Monterrey, Mexico (although Stephane is originally from France).  We spent time with them and a friendly group of bikers on the beach talking about our travels over a few beers.  The next night, we had dinner and drinks with Diana and Stephane.  It was great Spanish practice for the both of us and even a little English practice for them. 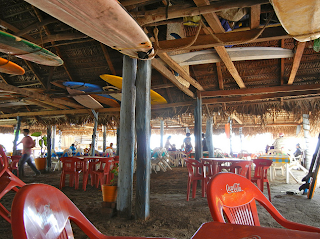 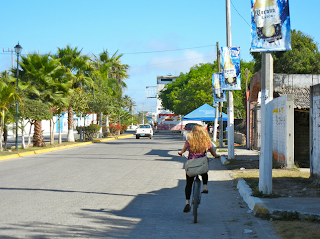 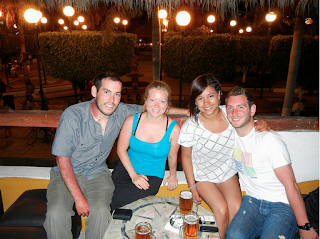 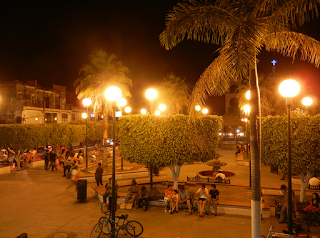 Next we moved on to Tepic where we explored for half a day before heading to Jalisco and settling down at Laguna Santa Maria del Oro for a couple of nights.  For me, it was a breath of fresh air.  Finally, we were surrounded by grass, big green trees, and mountains.  Laguna Santa Maria del Oro is actually an old volcanic crater that is now filled with water.  It's incredibly beautiful and our campground was right on the water's edge.  Our second night there we were treated to a live mariachi band while overlooking the lake.  Each night we entertained ourselves by watching the industrious ant colonies that surrounded our camp, and playing cards.  It really doesn't get much better than that.  We left the next morning feeling refreshed and ready for some Tequila. 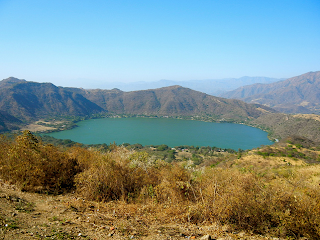 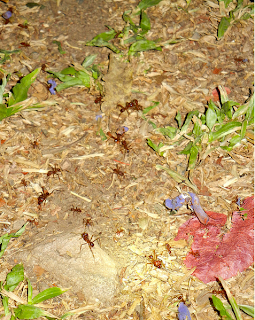 We got to the small town of Tequila just a little too late for a tour at Jose Cuervo, but not to worry, we just happened to arrive on the 482nd Anniversario de la Fundacion de la Villa de Santiago de Tequila, and Tequila know's how to party.  The plaza was filled with vendors, musicians, carnival rides, and fireworks.  We enjoyed some delicious margaritas, micheladas, and pastor tacos while taking in the celebration.  We slept in a locked parking lot that night and the next morning, rather than waiting till late afternoon for a Jose Cuervo tour in English, we headed to Casa Herradura in the small town of Amatitan.  I had read that though this operation is slightly smaller than Jose Cuervo, the grounds themselves are much more beautiful.  We were happy with our decision.  We got an English tour just ten minutes after we arrived with a small group of seven.  The distillery was beautiful and at the end we all sampled tequila together, my personal favorite being the "plata", although Brenton had to finish most of the tequila for me.

Our next destination was Guanajuato.  Another place that had been a favorite of Brenton and his sister's on their previous trip.  It didn't take me long to see why.  It's hard to explain other than the city just has an attraction.  It's a small town with lots of history and plenty to see and do.  We camped the first night on the panoramica then explored around town until we found a hotel with hot water at a decent price.  Since we already knew we wanted to spend some time here, we arranged to stay for a full week at Hostel Cantarranas in the Centro Historico.  This would be our first time staying in a hotel on this trip.  The couple of campgrounds in the area are all outside of town and we wanted to be close to the action.  Guanajuato is full of steep, narrow, winding alleys and each one is different from the next.  The architecture is beautiful and colorful and the city never seems to sleep.  We made two hikes up to the statue of Pipila, one for sunset and one for sunrise.  The view was breathtaking.

After Guanajuato, we headed to San Miguel de Allende where we paid way too much to camp for two nights.  We can't complain (too much) though, we met some really nice overlanders from Germany and Belgium.  Joachim & Barbel have been camped out in San Miguel for three years!  They are a very nice couple who gave us some great information and campground GPS coordinates for our drive south.  Bernard & Alexandra are traveling with their three young girls, ages ten, five, and three in a 2002 Land Rover Defender.  We spent a night exchanging stories and information with Bernard & Alexandra.

The architecture in San Miguel is similar to that of Guanajuato but more monochromatic and minus the steep hills.  San Miguel in general is a pricey area and is filled with retired North-Americans and European ex-pats.  The city is incredibly clean and the plazas are beautiful and well kept.  For our third and last night in SM, we ninja camped near the plaza principal and the next morning headed to the incredible church of Antotonilco.

The Santuario de Atotonilco is an amazing church just outside of San Miguel de Allende.  Pilgrimage to Atotonilco is a goal of many Mexicans as it has a significant role in Mexico's independence and is viewed as a very important sanctuary.  The walls inside the church are covered with beautiful murals and different stories from the Bible.  Only a visit would do it justice, but it is worth a mention and a couple of pictures.  From here we made our way to Dolores Hidalgo.

Dolores Hidalgo is a small town with a nice plaza, beautiful pottery, and some interesting hand spun ice cream flavors.  One of our first stops was at one of the many ice cream vendors in the plaza.  We were given samples of every flavor they made.  Some were great, some I don't know why they ever thought it'd be a good idea to turn it into ice cream.  Brenton tried all of the bizarre ones, including the shrimp flavored ice cream.  I couldn't bring myself to try the shrimp; avocado and beer were adventurous enough for me!  As we were strolling around the plaza that night, out of no where all of the lights in the plaza and the church went out.  We thought they must have had some sort of power outage; and then the loud music began to play.  On the entire face of the church they began to show pictures telling the story of the town's past and it's role in the fight for independence.  It was a really neat experience that we randomly stumble upon.

Next stop, Guanajuato round two.