Heading to the Mainland 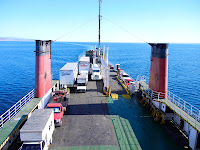 Maybe it'll be my job (Shannon) to bring the audience up to speed when we've had a lack of blog writing.  It's been a while so I'll have to thumb through some pictures and journal entries to remember it all.

Fellow travelers mentioned that when you're on a trip like this, time really slows down.  Sure, I thought, I can see that.  You're moving at a slower pace, not paying attention to that almighty clock that everyone is chasing.  Well, I had no idea just how much time would slow down.


I keep a handwritten journal that I write in almost every night.  For some reason I was looking back at my old entries.  I read something about the couple of days we spent in La Paz, BCS, and then I looked at the date.  In my head these days spent in La Paz had surely happened a few weeks ago, maybe even a full month ago, but no.  Six days!  That's how long ago it had been.  I said to Brenton, "Hey, do you realize it was only six days ago that we were in La Paz?"  He didn't believe me either.  I had to retrace our step even further back to prove I hadn't just written the wrong date. 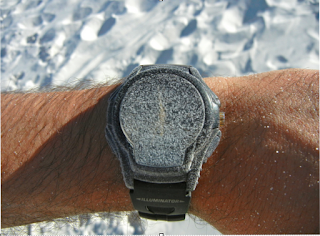 So does time slow down?  More than I ever imagined.  It made me think a lot about how we live our lives.  I'm not trying to get too deep here, but think about it.  How many times have you thought to yourself, Man, I can't believe another year has passed by.  Where did the time go?  I know for me each year always seems to go by faster.

What if we could all slow down?  Maybe it's not possible to live every day in this way, but what if we took more time, longer periods of time, to just slow down?  If even a fraction of  my life I was able to live in the way we are now, shoot even if it's just this trip (though I don't think this will be the last), I would be so much more satisfied with my time on this earth.  In the end, I don't think I would feel that life passed too quickly, that I didn't do the things I really wanted to do.  How great would that be?  I am so happy to have the opportunity to have these experiences.

Now, on to what's been going on with Ruined Adventures.  After Gettin' Raw in Loreto we headed off to La Paz.  We only stayed in La Paz for the night to check on the ferry situation.  This would be where we ship from Baja to Mexico's mainland.  Unfortunately, the ferry offices were closed the day we went so onward we moved to Todos Santos and Pescadero.


Todos Santos was a nice town, but not really my cup of tea.  I know some people love it, but it was pricey and you couldn't get someone to speak Spanish to you, even if you paid them.  Pescadero was in the start of Reggae Fest Baja so beach camping was out of the question.  Apparently they had the whole beach reserved for the event.  We considered parking in a nearby parking lot to relax and listen to the reggae, but then they started playing some horrible mix of reggae and hip-hop, so we went on our way.  Luckily a local pointed us in the direction of a really nice surf camp off the beach and we stayed there for the night.

My good friends Michael & Jaime hooked us up with their friends Mac & Kate who live outside of La Paz in El Sargento.  We stayed with them for two nights in their beautiful home.  Both nights we were spoiled with delicious, fresh, homemade dinners.  We really enjoyed Mac, Kate, their neighbor Steve and their cute pup, Paco.

After two relaxing days in El Sargento we headed back to La Paz to give the ferry a second shot.  Being it was the end of Semana Santa, we were worried the ferry service would be backed-up.  We were afraid we'd end up having to stay in La Paz for another couple of weeks just waiting for our ride to the mainland.  Well, we got lucky.  We arrived at the terminal ferry around 11:30am and we soon had tickets for the ferry departing at 4pm that same day. 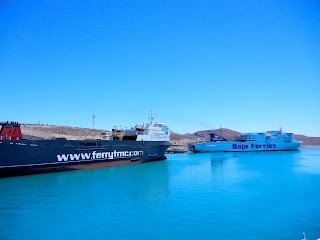 The ferry terminal is where we would take care of importing our vehicle and paying for our tourist visas.  We chose to ride on TMC Ferry so that we could have access to our vehicle during the trip.  On Baja Ferries, your car stays on the lower level and passengers are not allowed on the lower deck.  The ferry actually departed at 5:10pm and we were on our way to Mazatlan, a 14 hour journey. 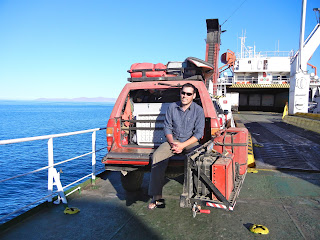 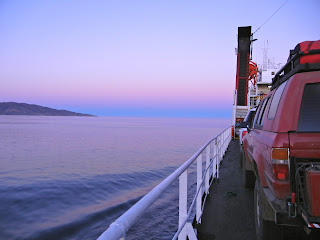