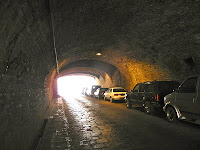 Chances are, if you've spent any amount of time in Guanajuato, Mexico you've probably met our dear friend Fred.  You may not have realized it, and you probably don't even remember it, but I'm willing to bet you've bumped into him…it's possible he's even saved your life without your knowledge.  Fred is the rare breed that you hear about in legends…his tales are so impressive that the only reasonable explanation is that they've been embellished more and more over the years, but I guarantee you, it's all true.  There's a reason that Guanajuato has such a great reputation as a safe place to visit, and the credit all goes to Fred.


You see Guanajuato Fred is like the "Dark Knight" of this unsuspecting place.  If you took Theodore Roosevelt's mustache, Chuck Norris' roundhouse kick, combined with Mother Theresa's soul, you would have Fred.  He's the good-guy equivalent of Kaiser Söze.  He seems to be hiding behind every corner, and always there when you need his help.  Just the mention of his name strikes fear into the heart of any thug with intent on inflicting harm to expats and travelers.   Fred is hiding a very dark secret, but I'll explain that in a minute…

We were first introduced to Fred by a new friend Katie that we found through the Muskoka Foundation.  We were walking downtown when we bumped into Fred by chance, which is common in this small colonial town where everyone seems to know each other.  At first glance Fred looks like the kinda tough guy that makes a living out of underground illegal street-fights, willing to kill his own mother if she rubbed him wrong.  He was strolling in the opposite direction but he saw Katie and came running our way…I may or may not have soiled my pants a little when I first saw him approaching us.

After a brief introduction, I realized this tough guy had a sweet side underneath that chiseled, rough exterior that one can only build through a life of incarceration and fighting other "tough-guys" to survive.  Somehow it seemed like we had an instant connection, he was my new best friend.  Even though Fred was originally walking the other direction, he decided to walk us to our destination.  One thing I noticed during this long stroll was that he had a certain way with women…they would stop dead in their tracks and instantly focus all attention on his face.  Usually they would swoon "Oh Fred, I've missed you baby!" or "Fred, you should come to my place later tonight!"  I couldn't help but notice that even Shannon was looking at him differently and smiling in a funny way.  I couldn't complain, even I had a crush on him!  I'd better watch this one close, he seems to have some unspoken effect on everyone he meets… 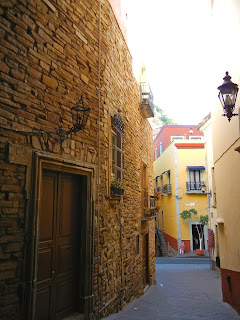 Later I heard more about Fred from other expats we met living in Guanajuato.  Apparently Fred has quite the reputation and he's been known to walk girls home late at night from the local bars and restaurants, making sure that they get home okay, and usually he ends up staying the night with them.  Rumor has it that he has many girlfriends all over town and apparently none of them mind that they have to "share" him!  I wouldn't be surprised if had a few kiddos spread out around town.  I asked what part of town Fred lived in and it was hard to tell by the responses if he was actually homeless or if he lived in one of the local hostels.  He didn't look like he was homeless, but that would explain his tough exterior.

Later that week we saw Fred again, standing on the corner.  Like most quick introductions we've had, I expected him to not notice us in the crowded street.  To my surprise he quickly picked us out and had no problems remembering who we were.  Fred tagged along again and he was our chaperone for the evening, making sure that no pick-pockets or street vendors even thought about approaching us.  I now knew what it felt like to be a "made man" in the mafia, because with Fred walking us around town we were untouchable.  When Fred was with us, we noticed that people crossed the streets just to avoid walking near us…this must be how Kimbo Slice would feel if he were to stroll through an all-white country club in the South.

In case you haven't already guessed, here is the key to Guanajuato Fred's deep dark secret…

At first glance Guanajuato Fred is obviously a dog, but if you actually know Fred you'll know he's not just any dog…Fred seems to have no "owner", but at the same time he's not homeless.  This is strange at first but eventually you understand it the more you get to know him.  You see, no one can actually OWN Fred and you will NEVER see Fred on a leash (although I have heard rumors of Fred walking humans around town on a leash).  We actually strongly considered kidnapping Fred and brining him with us as protection during The Journey, but then we quickly realized that this was a silly concept.  It's like wanting to keep the sun in your pocket, to light up your way at night…it's simply impossible.  He would have eventually become bored with our journey, only to escape and eventually find his way back to the magical town of Guanajuato where they would throw parades in honor of his return.

Fred walked us home several times while we were staying in Guanajuato and eventually we got to know him very well.  He would usually walk about 100 feet ahead of us, often pausing at intersections and street corners to look back and ensure that we're still nearby.  If for some reason we took a right when he went straight, we'd often find him at the next block, waiting patiently for us.  It was like a Houdini act, it honestly made no sense (does any of this?).  Fred usually takes advantage of his time spent waiting or walking, and he likes to play a game known as "I'll Pee On That".  You see, Fred understands how important it is to occasionally stop and smell the roses.  If the mood catches him right, he'll pee on that too.  I'm not sure how he does it, but Fred managed to pee every 50 feet or so on every corner, doorway, trashcan, and even a strangers shoe (this means that the stranger is a drug dealer and they must be immediately arrested).  You may think that sounds silly, but after witnessing him pee on someone's foot, the military quickly swooped in and whisked the victim away…form your own conclusion.  What's also amazing is that after a week, the other spots that Fred peed on began to sprout beautiful flowers, even straight out of concrete.  We don't pretend to understand it, we just report the facts.

I'm sorry to say that even though Fred has many friends in Guanajuato, he's not loved by everyone.  During one night out on the town we went to the University's movie theater for a free screening of The Help.  Fred met up with us halfway to the theatre and tagged along, even waiting with us in the long line.  Fred walked inside right next to us, but we were all shocked to discover that this was a HUMANS ONLY theatre that did not tolerate "Fred's kind".  It took four men to successfully drag Fred out of the theatre, since Fred had apparently staged an impromptu "sit-out" demonstration of peace.  It was hard to enjoy the film, knowing that the plot's lessons on racial equality and civil rights are still denied to this day, as evident in the 10 minutes beforehand while Fred was being treated like 3rd class street trash.  You'll be happy to know that even though Fred lost that battle, he won the war, considering that we've been told that recently the Governor caught wind of the injustice and ordered the military to burn down the movie theatre.  Rumor has it that they have proposed plans to build a doggy day-care and spa over the site.  The day after they burned down the theater, the paper ran a photo of Fred during his morning stroll, as he paused near the rubble and ashes and lifted his leg.  The caption for the photo read "I'll Pee On That"