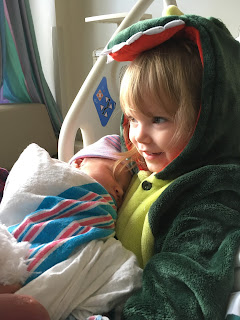 We wanted to break our silence to let our friends and family  know that we gave birth to a beautiful baby boy a few days ago.  We also wanted to let all 5 of our faithful readers know that we're still alive.  To everyone who has called or sent texts, we promise someday we'll get back to you, but for now here's proof in a photo that it’s true.

After some debate we finally settled on the name for our son.  The first name Charlie we originally decided on at some point during our time in Central or South America.  For some reason the name really grew on us and has stuck ever since.  Shannon's sister named her newborn Charles earlier this month so we hesitated, but eventually we said screw it and decided her kid can always change his name if he doesn't like the confusion with his cousin.  Maybe they'll have to cage fight to decide who gets to go by Charlie.  We're starting his MMA training now just in case.

For his middle name we had a long list and it ranged from boring, to cheesy, to ridiculous.  We thought about making Danger his middle name, but since my sister beat me to that then it would lack originality.  Somewhere we had seen the name "Grey" and we liked that it reminded us of the Glacier in the Patagonian ice field near Torres Del Paine.  Someone also pointed out that it could be short for "alegre", which in Spanish means happy and cheerful.  Then my Uncle pointed out that his Great Great Great Grandfather's name was Grey.  Sold.

So with a name like Charlie Grey Cooper, a little boy growing up in Appalachia should have no problem blending in with the locals.  I doubt they'll suspect that he's 1/4 Mexican, his parents used to live in a van by the river and his grandparents are hippies.

Now that all four of us are here, we are long overdue for a trip out West to see the friends and family we’ve been neglecting!