Here's a crash course in geography, chronologically listing a few of the countries we explored between “here” and “there”.

“Focus on the journey, not the destination. Joy is found not in finishing an activity, but in doing it.”

SIX MONTH PAUSE: Between April and October 2013, we stored our vehicle for 6 months in Uruguay.  We spent this time traveling the US to visit family and friends, taught at the Overland Expo, did some volunteer tornado relief in Moore, OK and did some other work to fund the rest of our travels.

Container shipped our Toyota from Zarate to Miami - January 2014 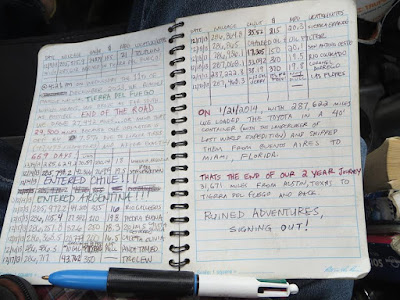