Technically we were on the road, still in the United States,  but we still felt completely unorganized and overpacked. While visiting family in Washington state, we paused for a chance to re-organize, de-clutter, do some work and get rid of unnecessary gear.

WARNING:  From this point forward this post gets boring unless you're into Toyotas and vehicle customization.

Thankfully my brother was able to help me out with a few projects, which made it possible to knock out quite a bit and I enjoyed the time out in the garage with him. I was happy he had finally taken a little interest in what we're up to, although it came at a cost.  He quickly went into big brother mode, saying things like "You know, if it was ME taking this trip, I would do it differently THIS way..." and he insisted on showing me all kinds of big RV's online, saying "THIS is what you need for your trip".  Eventually it turned into, "Hey Nicholas, why don't you go on your own adventure and do it how YOU would prefer to do it!"  My sister-in-law really liked that idea but I don't really picture them doing it anytime soon.

DUAL ODYSSEY PC1200 BATTERY INSTALLATION:
We fabricated an extended battery tray where the factory battery tray is.  This made it possible to mount two Odyssey PC1200 AGM batteries next to each other for my dual battery setup.  Once that was finished, I headed over to Tri-City Battery to have them install the parts that I had collected for the system.  Unfortunately the most important piece of my dual battery system, the Automatic Charging Relay, was missing a terminal screw.  I had scored this for a great deal on the Expo Portal classifieds, but I didn't have time to source the unique terminal screw.

Since we were running out of time to hit the road, I let Tri-City Battery talk me into going the traditional RV route with a AMETEK Prestolite SAS-4202 continuous duty solenoid to isolate the batteries.  This is what will keep us from draining the starting battery when parked.  While the engine is running, the batteries are connected and both are charged simultaneously.  The "house battery" or auxiliary battery powers a Blue Sea fuse box that sits behind the passenger seat.  They ran the wiring thru the firewall, down the passenger kick panel and under the door sill trim.  Overall they did a clean installation and they even gave a discount through a friend's connection.  Even though the install took longer than they quoted, they did not charge me for the extra time.

UPDATE: after 11 months of use, the heat of Central America and rough roads took their toll on the continuous duty solenoid and it bit the dust in Costa Rica. I posted in an off-road forum in Panama, looking for a better solution and a super friendly stranger from David, Panama gifted us a Guest 2111A manual battery switch, commonly found in marine applications.  The manual battery switch takes some muscle memory, otherwise you accidentally leave the batteries connected or isolated, but eventually you get into a habit.  These things are simple and bombproof as long as your connections are good and tight.  After years of using this manual battery switch I now tell people to save their money and choose the stupid simple and reliable approach of a manual switch like this.

After the dual battery isolator was setup, my brother helped me wire the Fan-tastic Vent Fan that I had previously installed on the roof.  We also wired in some interior LED lighting, and some auxiliary 12v outlets in the back for charging electronics.  It's been a nice feature to charge our cameras and our USB-charged Steri-pen while we're on the go or even while we're away from the vehicle.  The lighting has actually completely eliminated the need for using our backpacking lantern, other than when we're camped away from the vehicle.

While my brother was helping with some of the electrical upgrades, I was taking care of other loose ends.  I replaced all of the belts under the hood, along with all of the hoses and flushed the radiator and topped it off with some fresh Toyota red coolant.  I replaced the brakes and greased the suspension again.  I changed the oil again.

When we left Texas we were so loaded down that the rear OME springs settled pretty quickly and I was worried about the leaf pack bolt gouging the lip on the fuel tank and causing a fuel leak.  This is exactly what happened to our friends James and Lauren (Home On The Highway) on their 4Runner with the same leaf springs.  I had chosen the OME light/medium suspension when I probably need the heavy suspension for this trip.  My reasoning was that I could install an add-a-leaf for the trip if I needed, then after it could be easily removed to be more suitable as a daily driver.  All the conflicting information online had me unsure if the heavy kit would be overkill, but here we are heavily loaded down.

Unfortunately I couldn't find a proper add-a-leaf in such short notice.  Since I had used the Zuk mod previously without issues, I decided to give it a shot again while we search for another solution.  I had tried it before the Old Man Emu suspension, for over a year, with great success.  Part of me wanted to try it on our PanAmerican journey because I wanted to put the Zuk mod through the ringer and see how it held up to long term abuse.  The coil springs I used were from a 1997-2005 Jeep Wrangler TJ, cut to 14" long with an angle grinder.  I picked up the springs from a junkyard for less than $17 and borrowed a coil-spring compressor from O'Reilly's which was free because I returned it within 48 hours. 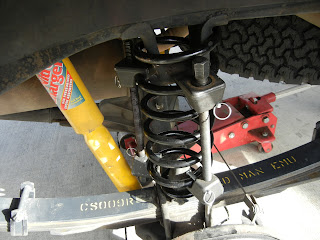